Hacking a DVI cable to build an ADC to DVI converter

In the last post, I mentioned that my powermac G5 came with a video card that had 1 ADC and 1 DVI out. I wanted to hook up 2 screens to it and do not have an ADC monitor. (besides, the 25v line intended to power the ADC monitor is under-spec in my homemade power supply.)
Well, I took out a standard DVI cable and carefully opened up one end: 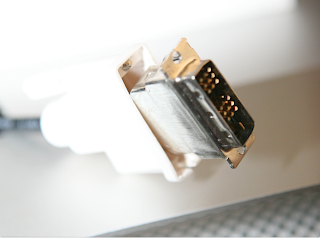 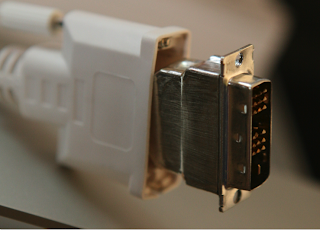 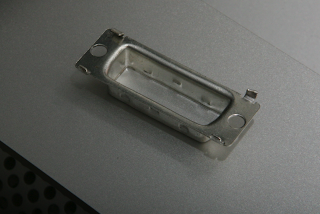 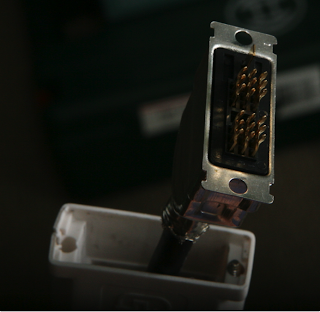 The pins on this single link DVI-D cable are not complete, and Apple used some of the non-existent pins on the ADC side of things. I had to move 3 pins (1, 9 and 17) to the area in the middle (4, 12 and 20). I drilled holes using a PCB drill and pulled out the pins with long nosed pliers. I then placed them (pins and all) on the ADC port of the video card and applied some epoxy to the area around the hole (the holes were too big).
This is after only one pin is moved:

This is after all 3 pins were moved. 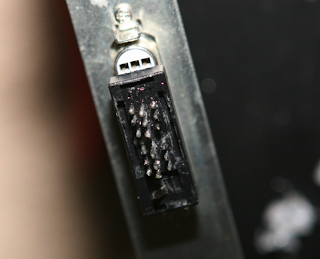 I then carefully used a good combination of shrink tube on the wires so that nothing will short. 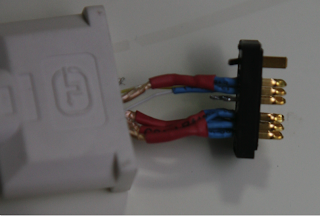 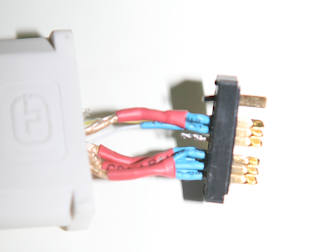 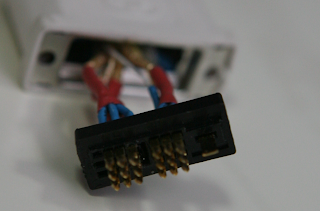 After testing this to verify that it works, I epoxied the black part back on to the shell. Now I have 2 screens hooked up to the Powermac G5.
Posted by Jonnyboy at 2:35 AM

I have been wanting to try this for a while. I hacked up a G5 AGP-Pro video card that has the ADC connector to fit in a G4, and I would like to use dual displays. I have just been debating whether I wanted to make my own adapter like this, or attempt to actually replace the ADC with DVI right on the card.

I currently 3 broken G5's with ADC+DVI ports and am trying to build one working machine.

However I only have a DVI screen for testing.

Do you know if the bios/boot messages will be shown if I only have a DVI monitor connected?

the Reverend:
I would suggest making an adapter, replacing the ADC on the video card would involve desoldering the ADC connector and rewiring it. Since you will be using wires, you could potentially introduce noise into the system.

Steve:
Since I have no ADC monitors, I initially hooked up only one screen to the DVI part and the system uses this as the primary screen. I have a imac G5 "board only" that I don't have the internal LCD for, and it uses the external video port as primary screen as well. You should be fine plugging your screen into port "2"

I love the idea, its just what i need to hook up my old G4 Power Mac to my 42" but Im not sure which pins i actually have to move and to where? Is it only for fitment to the ADC or is it that the pinout is different?

I just checked the pinouts for both the ADC and DVI-D single, the way you described your work it doesnt make sense, I think you meant to write pin 20 instead of pin 19?
Its a great idea, but I want the work to be 100% before others, self included, try it, especialyl when theres 25+ volts

Satan's: You just need to modify the DVI connector to fit the needed pins on the ADC since ADC connectors are not readily available. Just look up a pinout to match the corresponding pins.

GT: I stand corrected. I have made the necessary corrections. I actually moved pin 17 (not 16 as originally stated) to pin 20 (not 19 as originally stated). There should already be a pin in 19 and you are right it does not make sense. Just make sure there is only 1 way to plug the cable in. I intentionally left out the connections for the 25v (all on the first 2 rows) and the USB data. The - pin by the 4 analog pins should prevent backward connections and shifting the connector the wrong way.

Umm. Belkin makes an ADC to DVI connector for the G5 and the G4. Internet search.

Heads up. good tute however.

@theReverend - Heydude Lee here...
I'd be interested in following you progress on this - I'm trying to do the reverse - replace the dvi with the another adc connector so I can use dual flat displays on a G4 dual MD. since I'm a tech novice it may help me to see something using the same equipment & then try it myself.
thanks! appreciate any info/posts.
Have the nice Holiday!
BlueSkies ~ HARLEYWOOD

I must to say this blog is very interesting,actually all the ideas in this blog catched my attention. I threw some cables once but i didn´t know how useful they can be.