It has been a long time since I dealt with automotive stuff. Last time I did anything that can be considered major was a few years back. Stuff I did before, in no particular order:
We recently got a 2006 Prius. There are only 2 variants sold here in Australia, the base model with "nothing", and the "I-Tech" model with "everything".
Having used it for a few months you realize that it's a bit hard to find a good spot to attach a 3rd party navigation unit. The windscreen is tilted at an angle such that if you attach it near the bottom, it will be beyond your arm's reach (plus it will look so small you couldn't even make out the writing)
So what I want to do is attach a factory nav unit and make it appear on the built in multifunction display. From the fairly large amount of reading I have done, this has never been successfully performed.
Many people also shared with me what they know (so I don't repeat other people's mistakes). One of them was Steve, who told me that:
The steering wheel controls and the nav computer arrived. It came with the mounting brackets. This unit came from under the driver's seat in the US. I still have to look under the seat in the Australian model and see if it is still under the driver's seat (right) or if they just left it in the left.

Anyway. First step is to construct connectors. I took some DB9 shells and cut up the flat surfaces with a dremel. I then poked the pins into the nav unit's port and epoxyed them to the pieces of the shell. The results weren't very pretty at the moment, but hopefully no one is really going to be taking a peek under the seat.

This is the connector after one row is in place: 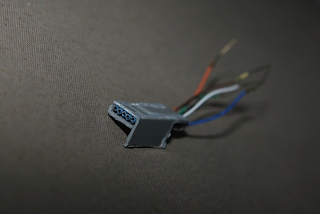 Once I got one connector (the one for the display) all done, it's time to hook it up to my commodore 1040s monitor. This will give me a clue whether I should proceed or if I am wasting my time.
The left connector in this picture is the RGB, the one on the right has power (I used an ATX power supply, fed 12v to +B and ACC) 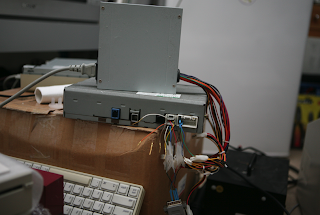 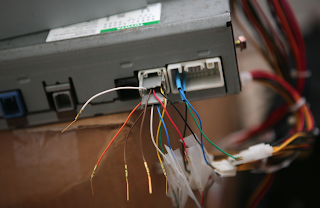 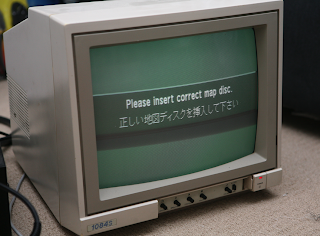 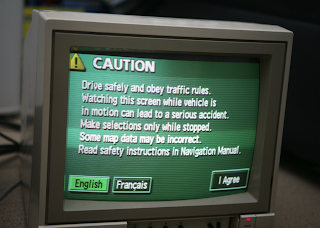 I tried to see if I could eject the nav DVD.
Ok I'm beginning to feel more confident that I could actually pull this off... Let's see how it looks like on my TV ... just for fun... I used an RGB to component converter (that I actually constructed for my Apple IIGS) that is not shown in the picture, and the composite cables on the left is unrelated and goes to a different device 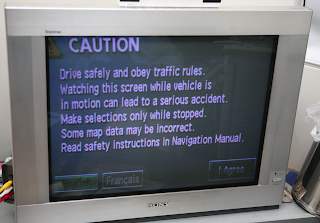 Since I don't have the MFD yet (or rather, I am not ready to take the dash apart) I have no easy way of pressing the "I Agree" button. So that's how far it gets. Plus I don't have a GPS antenna so if I went ahead and attached it to the car right now, I won't really be able to see anything.
27/09/2009
I have some free time at the moment and I was very curious to see what will happen if I went ahead and attached it to the car. After going through priuschat and reading the many "stereo removal" guides (such as this one by Chris Dragon http://www.techno-fandom.org/~hobbit/cars/chris-dragon-dash.pdf ), I went down to the car park to figure out how accurate they are (my steering wheel is on the right side, all the guides I've seen are for cars with the steering wheel on the left). Except for the fact that the "power" button is on the rightmost vent, everything else is just mirror image of the guides (down to the location of screws and clips).
Since I have no plans of leaving it permanently installed at this time, I just dumped all the equipment on the passenger foot area. 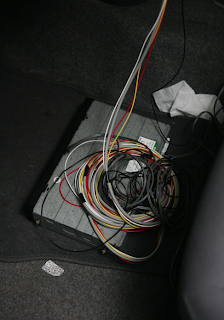 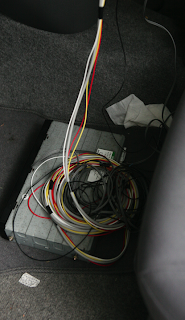 I then hooked up only the wires needed for the display, plus the communication lines. 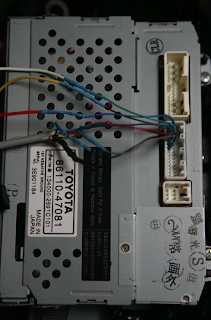 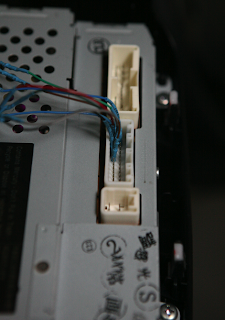 I also needed to power it up. There is the plug that goes to the clock. It conveniently has all the signals I need (batt, acc, gnd). I hooked up the batt and acc to the clock plug, but decided hook up the ground in the spot the 10mm hex bolt previously went: 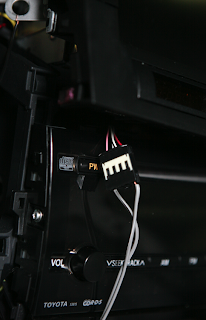 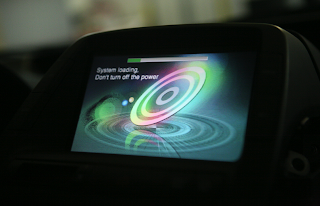 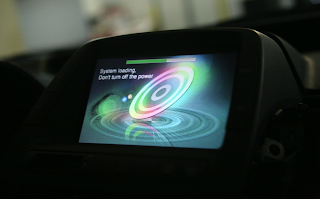 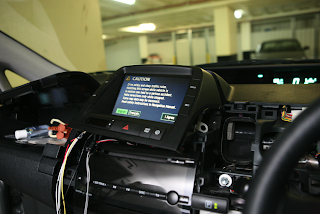 Now that I have the touch screen hooked up. Let's see if pressing the "I Agree" button does anything... Success: 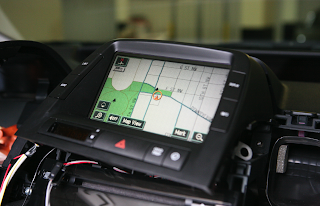 Since I have no GPS antenna and that I'm 6 basement levels underground, I won't be getting any GPS signals. It defaults to some location.
The INFO button also now displays several new icons that wasn't there before: 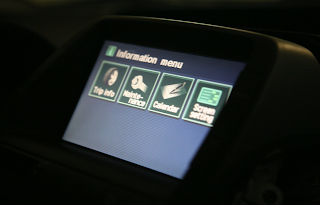 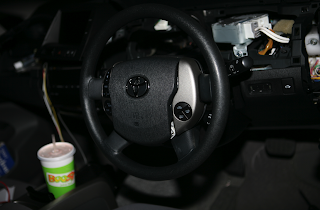 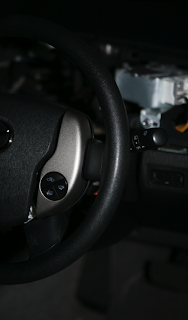 I then carefully unclipped the cable tie for just the right side controls. It looks like they used the same number of wires too. 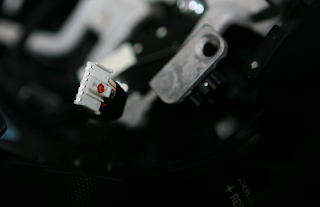 Then I hooked up the controls with the nav buttons: 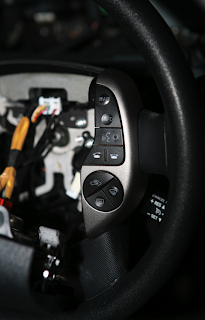 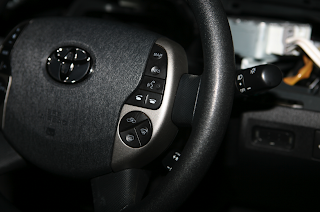 And the good news is, it actually works. Pressing the voice button beeps the speaker (and then does nothing because I haven't got a mic). The phone buttons don't do anything, probably because I don't have bluetooth. Info button cycles through the energy screen and the consumption screens. Map button shows the map.
I have left the steering wheel controls in place. I have removed the nav system and reassembled the dash. I will probably do some more tests when I get more stuff in.
Screen finally arrived!! Along with the antenna!! I immediately installed both. After which I am able boot the US disc and go into the hidden menu (the one under volume). From here I chose "loading" and changed it to "Australia". It then goes back to the "please insert correct map disc" screen. Ejecting the US map disc and inserting a locally supplied "whereis v15" dvd that I borrowed caused the loading screen to appear. It looks like this is going to work.
These are pictures on how the system currently works.
Screen still off: 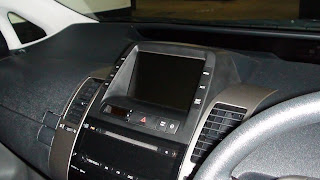 Turn on the key: 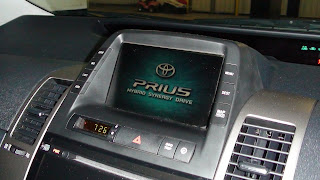 That's really great. All my fears that the MFD will have units in miles are for naught: (click to enlarge) 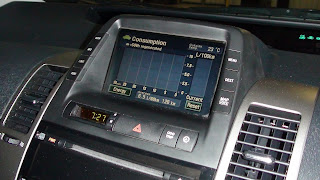 I hit the "menu" button: 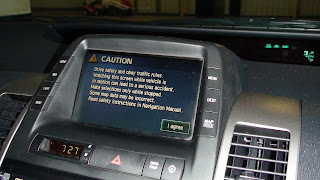 Then press on the "I agree" touch button: 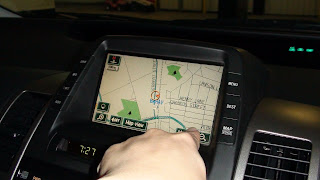 The DEST button works too: 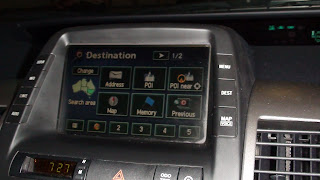 That's all for now. I still have to connect the reverse line (I am having a hard time looking for it). I also have to get an overhead console with a mic so I can use the bluetooth. Sadly I do not think the australian software supports voice control :(. Pressing the voice control button on the steering wheel does nothing. It used to beep when I had the US maps disc running.
22-11-2009
I have finally located the reverse wire. There is nothing connected at the point where it's supposed to split it up for the nav unit (probably because it's a non-nav model). I have instead, traced and finally found the wire that leads to the back of the car to turn on the reverse lights. This was well hidden behind a panel on the driver's (right) side near the accelerator pedal.
After hooking this up, I also found the wires that led to the overhead console. I connected 3 wires: Mic +, Mic - and MACC. These went straight to the back of the MFD into M14.
29-11-2009
I have received my overhead console from a with-nav unit. It does contain the Mic and the Mic amplifier. After hooking it up for a quick test last wee, I found out that it did ... NOTHING. The bluetooth hands free doesn't do anything. I then went back to the schematics for another round, and my continuity tester just to make sure all the wires from the overhead console, to the MFD, and then to the nav unit are all correct. They all checked out, but then, what's this? There's an extra wire connected to nowhere. It was pin 3 of M14 from behind the MFD. The schematics say SGND (signal ground) to instrument panel Brace. I was thinking: "No, that couldn't be it." Most grounds in automotive parts are connected to the chassis. The MFD had a metal case bolted to the chassis, and I had assumed this was also linked internally. Well, I ASSUMED WRONG, and that IN FACT, WAS IT. After connecting pin 3 of M14 with a wire to an exposed part of the chassis, the mic finally worked.
What now remains for me to do is to wrap the wires into neat bundles. Some of the cables for the nav box should be fished under the carpet. I also need to place the GPS antenna somewhere, preferably close to where the original one went. At the moment I sticky taped it just behind the MFD. I should also fish the cable under the carpet through the center console. I also got an auto dimming mirror that's supposed to automatically darken the mirror when the car behind you is shining bright lights at you at night. I know the correct wires needed for it, but I'm not sure they are all available near the overhead console area. I think this will be the same as the Mic, the wires would be there, but they are not connected anywhere.
Posted by Jonnyboy at 1:21 AM

Wow, that's amazing that u managed to fix a nav on a non nav prius. I just bought a non nav prius and was looking for ways to do this. But after reading what u have Gone thru, I'm not sure I can pull this off. Btw, how much does it cost for u to get all the necessary parts to make it work? Kudos to u. Chris

Great work. Looking at doing that on one in NZ. Know of any sources of the Nav DVD?

The nav DVDs are available from the whereis website. I heard the latest V17 includes both AU and NZ maps. Depending on where you obtain the navigation box from, you would also need the disc from its country of origin in order to change the region.

I realize that this is an old post but I have some questions. Did you end up needing the JBL radio? What were the part numbers needed for the items you got (Mainly Headunit, Nav unit, and Radio if you had to upgrade to the JBL)?

What color wire is needed for the ground for the bluetooth microphone? Also which connector is it? I have the nav mfd installed and the console mic but nobody can hear me can you elaborate not going to hook up nav just bluetooth thanks

How much did it cost you? My prius was in a flood, and the only thing ruined by the water is the navigation system underneath the driver seat. I'm searching the web looking for a way to do the work myself. Thanks so much. You make it look easy. I'll give it a try.