Warning!!! If you are not completely sure what you are doing, don't apply what is described below. In any case I am not responsible in any way to the consequences that this guide may have. Read it at your own risk. Please do not proceed if you don't agree with the above.

After having read a different how-to article on the same topic:
http://www.electronics-lab.com/articles/Li_Ion_reconstruct/index_1.html
I decided to do some repairs on a similar laptop. This was a Fujitsu Lifebook S6120. The battery wouldn't charge anymore and after 5 to 10 minutes of attempting to charge it the onboard LCD displays a "shorted battery" error:

So, following the directions in the electronics-lab article, I proceeded to disassemble the battery: 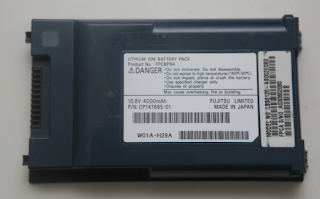 Unfortunately for me, it contained very different cells. And to make things worse, there are no markings on the cells whatsoever, just (what seems to be) red shrink tube and some tape: 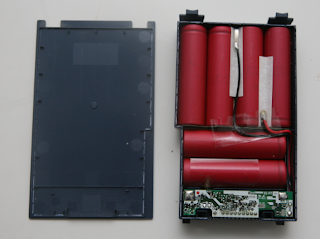 After doing some research I found out that these cells are called "18650 Lithium-ion cells". A few more searches and I found a company selling them:
http://www.dealextreme.com/details.dx/sku.1213
Make sure you order the non-protected ones as the protected ones have a built in circuit that cuts off power when you go below a certain voltage, this circuit is already part of the battery pack and would probably cause problems if you have two of them.

After waiting around 2 weeks, this arrived in the post: 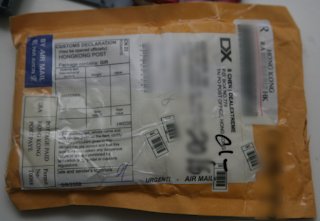 The package arrived opened so customs must have x-rayed it and checked it just to make sure. (It might look like dynamite in the x-ray, who knows, better safe than sorry).
Now, slowly pry out the old batteries, there are some double-sided tape holding them to the battery pack case: 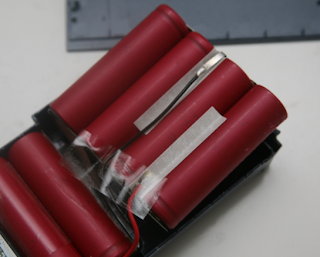 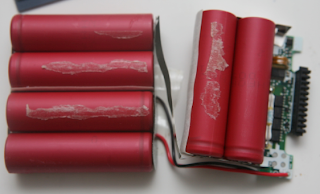 Test fitting it just to make sure it does (fit): 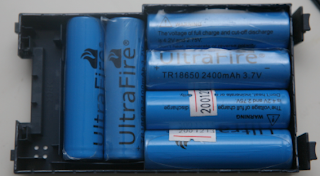 After taking more pictures and noting down the polarity of the original batteries: 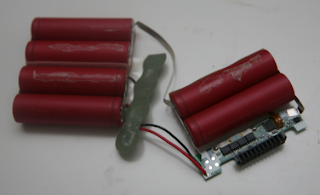 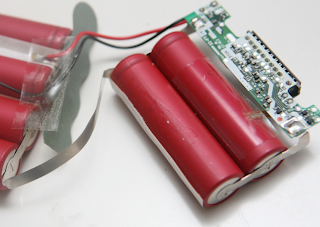 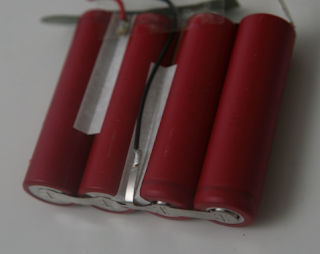 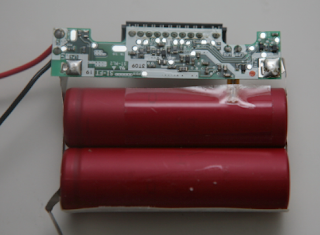 It's time to take the whole thing apart. Use a screwdriver and/or pliers to remove all the connectors. Try your best to keep them all intact:

Next would be to transfer all the tapes and insulators to the new batteries (keep them the same way you took them off). The next part involves attaching the connectors back on the batteries, ideally you would use a device for welding the tabs to the cells, but I don't have one of those. Instead I am going to solder them to the battery. I have read a lot of warnings that extreme heat (like that from a soldering iron) can destroy a lithium-ion battery and even cause explosions. What I did was wrap the cells in a moist cloth and not apply more heat than necessary. I also sanded down the contacts and applied soldering paste before soldering. I REPEAT: If you apply too much heat for too long, you could destroy the cells and/or cause an explosion. Ok, with the unpleasant stuff out of the way, we connect the cells the same way we took the connectors off the original cells: 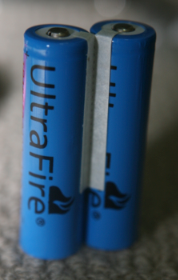 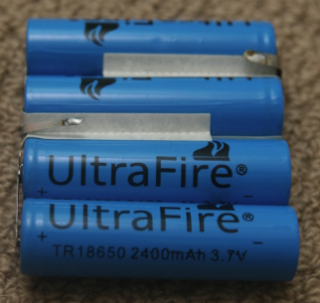 Then put them back in the battery pack case. Note that because the solder was a tad thicker than what was originally there, you might have to force them in. There should be enough space there to still fit the new cells in. Note that you have to return all the insulators/cardboard pieces back where they came from. In the last photo above, this will cause a short (and a possible explosion) if you do not. 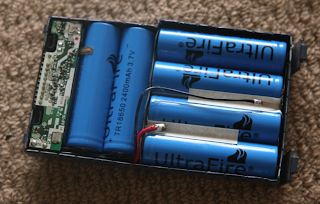 Then, to glue the case back together, I applied a small amount of epoxy all around the are and pressed it down with a phone book. 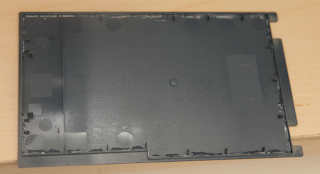 That's it. After plugging the battery in, it's working again. I also did a battery recalibration so that ACPI would show the correct charge level. This varies with different laptops and have their own recalibration procedures, but generally, you turn off all energy saving settings and fully charge the battery and leave it plugged 2 to 3 hours even after it says full. Then completely discharge it until the laptop turns off. Note that this will not damage the battery since at 0% reading the cells actually still have some charge left in them but the protection circuit cuts it off before real damage happens.

I am wondering how it's going after a couple of months of use?

Please let me know. Thanks for this very useful post!

Well, it's like I bought a new battery pack. I am getting more battery time than when the original battery pack was new.

Since I used the same type of cells as the original, the protector circuit works very well with it. The internal battery meter seems pretty accurate too and the estimated time remaining is correct 99% of the time and hasn't dropped yet.

Hi!
And how is your refurbished battery pack doing after those 10 months of using it? I'm curious 'cause i'm going to rebuild my own s6120's battery and those Ultrafire cells are really cheap. Do they keep their capacity? Greetz!

Should I buy a spare Li-Ion battery pack for my two year old Laptop and store it fully charged in the fridge?
Thanks
Brad Fallon

How come my laptop battery flashes both 25% and 75% when I press the button on the battery?

This should present a graphical application which shows the supervisor/process trees currently running and is updated in real time.
eb-5 visa

How come my laptop battery flashes both 25% and 75% when I press the button on the battery?